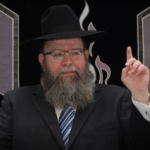 “After all is said and done, when my time in this world comes to an end, it will make little difference how much money I earned, how many rooms there were in my house, or which vacations I took. What has made my life meaningful and worth living would be the difference I made in the life of even a single child.”

Rav Aharon’s song expresses the sentiment that if only he would have the strength and energy, he would run through the streets warning people about the kedushah of Shabbos.

There are so many things I, personally, wish I could run through the streets crying out about. For example, how important it is to have a rav or moreh derech guide us in the chinuch of our children. How crucial it is that we express our love for our children. To model for our children the kind of behavior that we want from them. To never, ever hit our children. To have adequate life insurance… the list goes on and on.

And more than anything else, I wish I had the koach to run through the streets and cry to parents to watch their children and make sure they do not run into the street; to be far more careful than most of us are in protecting our children’s safety. Considering the many frightful situations I encounter far too often, I believe that it is but for Hashem’s chessed and miraculous protection that we do not hear of more accidents than we do, chas veshalom. And yet we know we are not meant to rely on miracles.

Recently, I was walking down a street in a Jewish community when I observed a disturbing scene. A woman – presumably the mother – was sitting on the first step of a steep, concrete 20-step staircase. Facing the other direction, a small toddler was climbing up the stairs, behind the mother’s back. The child – not even two years old – could have easily fallen backwards and the mother would never prevent it – she was not even looking!

Now, this may have been none of my business, but I could not continue to observe this dangerous sight without doing something. I called out to the mother and pointed out that what her child was doing was dangerous. To my shock, she just shrugged and said, “Oh, she always does that.”

I almost began to try to reason with her, asking her what she would do if the child would chas veshalom fall, but I thought I knew what she’d say: a response I also hear far too often. “Oh, I’ll just give her a potch so she won’t do it again.”

Whenever I address parents and appeal to them to never slap their children, the typical reaction I always hear is, “Well, what if my child runs into the street?” Yet this reaction makes no sense. Why is the child even in a situation in which he is free to run into the street in the first place?! Protecting your child from running into the street is your responsibility, not his. Answers in the line of, “Well, with so many children, how can I be expected to be everywhere at all times” make no sense either, if you think about it. It is simply not responsible parenting, period.

Yes, if I would only have the time and the energy, I would run through the streets, pleading with parents to be more responsible about their children’s safety.

Of course, there are some parents who do understand the dangers involved.

Recently, I spoke to a group of parents about this issue, and one brave mother approached me after the lecture, and shared as follows:

“Several weeks ago, my three-year-old ran into the street. Even though I thought I was keeping a close eye on him, he managed to do it anyway. The only reason I knew that he did was because I suddenly heard a car screeching to a halt and the neighbor screamed. I must admit it was both scary and embarrassing. What kind of mother doesn’t watch her son carefully?

“I was so upset that I almost gave him a small slap on the wrist, ‘to teach him’. But then I realized that this simply wouldn’t do the trick.

“Since then I can hardly go back to that memory, envisioning all the horrific other endings this story could have had.”

Dear fellow parents! Please take a moment to recall how busy our streets are, how many cars whiz by, sometimes carelessly, and how easily a child can get hurt…giving us no opportunity to even give that potch to ensure that “it never happens again.” Sometimes we are not given that chance for an “again.” That first time is too late. It takes only a split second for life to never be the same again.

When I warn parents that potching is not the answer, I am nearly always get defensive reactions to the tune of, “Well, that’s what all parents do.” Trust me, if the unthinkable happens, you won’t care what other parents do. You will see only yourself, and your child, and that will be the only thing that matters.

I may not be able to run through the streets (on the sidewalk!) warning parents to be responsible, but instead, I am writing about it. If even one parent – perhaps you – and one child is saved from avoidable tragedy, it would be more than worthwhile.

And allow me to reinforce my assertion that hitting children is never the solution. For some reason, we have fallen into this foolish trap, thinking that “children need a potch if what they are doing is dangerous.” I have absolutely no doubt that parents are only trying to do what is best for their children. No parent wants to see his child get seriously hurt. The results of this particular “not listening to Mommy” are too devastating to consider. So devastating, in fact, that parents feel they need to resort to hitting to drive the point home.

But here is the thing. When we believe that the way to help our children is by giving them this consequence, we are failing to think ahead. We are not realizing that the way to treat this problem is by preventing it in the first place.

Little children don’t run into the street to spite their parents. They don’t consider the dangers or risk. They are not trying to disobey you and need to be “put in line.” Little children run into the street because they are curious about something, or they get bored and start wandering, or they are overwhelmed by too much activity and start to run. It’s not a behavior issue – they are not trying to defy your issue, and they likely do not even realize that they have run into a dangerous zone. Their thoughts are not on the pavement under their feet, and might once again not be with a focus on their location the next time they feel the urge to run.

If we were to view running into the street as a behavior that must be stopped, the “natural consequence” is to be run over by a car… No loving, sane parent would ever allow this to happen to their child; not in the name of “discipline” or for any other reason. Punishment, in this case, is not the way. The only way to prevent this from happening again, is by…preventing it from happening again. You; not the child.

As the parent, your basic job is not to allow your child any freedom in a potentially dangerous situation. Your child will earn his freedom by learning – mainly by observing the seriousness with which you take safety – to keep himself safe in all situations.